An Interview with “The Muppets” Star – Miss Piggy (seriously) 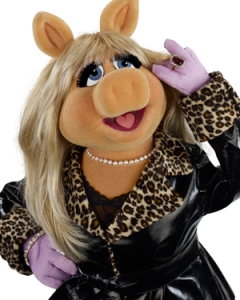 A few weeks ago, I had the opportunity to have a conversation with Miss Piggy.  Here are some snipits from the interview…

What is Disney’s “The Muppets” about?

It’s moi’s story, of course. It’s about how I am working in Paris and Kermit and the other Muppets come over and beg me to come home. I run the complete gamut of acting—from smiling to frowning. It’s got Oscar® written all over it—and I’m not just talking de La Renta. I have heard rumors that there’s another storyline in the movie that doesn’t involve moi, but who really cares about that?

What is your role in Disney’s “The Muppets?”

Moi plays moi.  It’s a casting no-brainer. Naturally, all of Hollywood’s top actresses tested for the part—Roberts, Streep, Winslet, Jolie, Bullock—but in the end they decided that there is only one moi and I’m it!

In the movie, I portray the plus-size fashion editor of Vogue Paris—I’m in charge of a whole office full of editors who all want to look just like moi. But of course, Kermit wants me back with the Muppets to save the day and put on some big show.  Can I resist? Well, see the movie and find out. END_OF_DOCUMENT_TOKEN_TO_BE_REPLACED

This entry was posted in Movie Background and tagged Disney, Miss Piggy, the Muppets.

A Preview of The New Muppets Movie

I love how what’s old is new again.  I got some early access to the new trailer for The Muppets.  Check it out:

This entry was posted in Movie Trailers and tagged Disney, the Muppets, trailer.